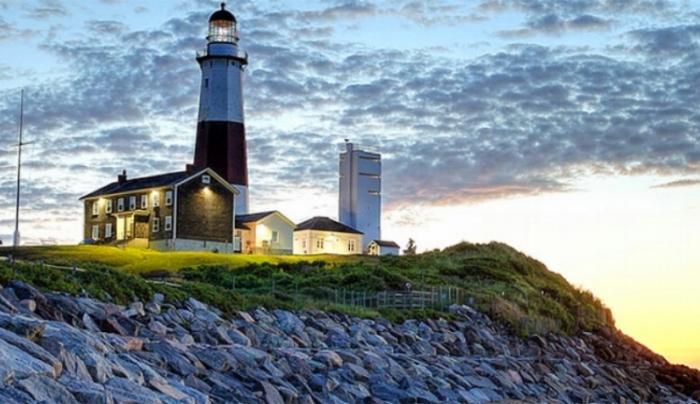 Built somewhere around 1796, the Montauk Lighthouse is located near east Long Island, on Block Island Sound. The lighthouse is the 4th oldest (and still active) in the US. The complete structure stands at a massive 110-feet and resides inside the famous Montauk Point State Park. The beacon from the lighthouse is programmed to flash every five seconds. Amazingly, its beacon can easily be seen as far as 19 nautical miles. Fortunately, for those who wish to see and feel the lighthouse in all its glory, the structure is accessible and you can go for a trip to the history sandstone lighthouse through different modes of transportation.

During the Second World War, the United States army took over the lighthouse to mount a coastal defense unit. There were three civilian maintenance keepers of the lighthouse, all of whom went home in 1943. Right beside the Montauk Lighthouse, the US army opened Camp Hero, which was back in 1942.

Just a year after the Second World War ended, the USCG (United States Coastal Guard) took over the lighthouse as primary keepers. They ran the lighthouse up until 1987, which was when it was fully automated. In May of the same year, the Montauk Historical Society inaugurated the lighthouse museum, and opened it for the public.

When Should You Visit the Lighthouse?

You can take an exciting tour of the lighthouse from mid May to the second week of October; this is when tours are available daily. After October, you can visit the lighthouse on weekends beginning from the mid of March to late April as well as in November.

You can take a tour of the iconic Montauk Point Lighthouse through the keeper’s cottage which was built somewhere around the 1860s. You can even climb to the top of the lighthouse, but you are going to have to climb the spiral, 137-step staircase.

Driving to the Lighthouse

You can drive to the lighthouse from Hamlet, Montauk (the lighthouse is 6.5 miles east of Hamlet). The easiest way to get there is through the New York State Route 27. You will be able to see the lighthouse at the loop of the highway. If you’re coming from New Jersey, you can take interstate 495 (the Long Island Expressway), come out from Exit 70 on Manorville Road and then just drive south.

Taking the Train or Bus

During peak season, which basically starts from July and ends in September, you can take the shuttle to Montauk Lighthouse, courtesy of the Suffolk County Transit. It’s a two-way trip and the ticket prices are reasonable. If you are a student or a senior, you can get some discounts. For kids below the age of five, the ride is basically free. The shuttle bus service runs from Monday all through Saturday, and there are eight trips per day scheduled.

Take a Boat Ride to the Lighthouse

If you want to see the lighthouse from the water, various boat charter companies schedule rides to Montauk Island during the summer. You can even charter a boat just before sunset and turn it into a romantic trip. Sit back and enjoy the view of the lighthouse while the sun sets. There are plenty of charter companies you can opt for such as the Montauk Yacht Club, Viking Fleet Charters, Runway Charters, etc. Although some companies will provide you with light snacks and beverages, it’s still better to pack your own food and drinks.

So there you go, everything you need to know about the Montauk Point Lighthouse and getting to the structure. Have you visited it recently, or at all?