Cradle of Aviation in Garden City

As we journey through our Aviation history and monuments, our next stop is none other than The Cradle of Aviation.

Undoubtedly, The Cradle of Aviation Museum, in Long Island is another big thing when it comes to the preservation of aviation monuments.
Located in Garden City, east of New York City’s Long Island, The Cradle of Aviation Air and Space Museum maintains a wide range of aircrafts, artifacts, and aviation feats. This makes the site a must-see for aviation enthusiasts and persons seeking knowledge about American aviation history.

The architecture of the museum, a vast glass-enclosed building, is itself an attraction to visitors. The 150,000 square foot structure resembling a spacecraft, maintains exhibits including hot air balloon and Apollo lunar module.

You may be wondering how the museum earned the name “Cradle of Aviation.” Well, you can get the answer to your question when you visit the museum. But let me gist you with a little info.
Long Island earned the nickname, Cradle of Aviation in the 1920s. The name stems from the natural flying environment of Long Island. The area is flat and virtually treeless making it suitable for aviation activities. About 20 aircraft manufacturers operated in Long Islands between 1918 to 1938. In 1927, Charles Lindbergh flew from Long Island to Paris.

Museum’s History
The famous Cradle of Aviation Museum started as a dream of George C. Dade, Henry Anholzer of Pan American Airlines and other volunteers.
To achieve the dream of creating an aviation museum, they started acquiring and restoring aircrafts. The first acquisition was a World War I Curtiss JN-4D, discovered by Dade in an Iowa pig barn in 1973. Subsequent acquisitions include a Grumman Lunar Module spacecraft, Republic Seabee, Republic P-47N Thunderbolt, and Grumman F-11A Tiger.
The aircrafts occupied hangars 3 & 4 of the Mitchel Air Force Base. Nassau Country purchased these hangers when Mitchel Air Force Base closed in 1961.
In 1980, the Museum ultimately opened with few aircraft and Dade as its first director.

The Cradle of Aviation Museum closed in the 1990s to undergo a massive expansion and face lift program.

The hangers, which had received no form of renovation before the museum’s opening were refurbished. The museum re-opened in 2002, in a massive and state-of-the-art facility.

What makes the Cradle of Aviation Museum more interesting is the variety of offers visitors are treated to. Visitors can have access to the cockpits of exhibiting aircraft and watch short films.
Aside from aircraft viewing, you can watch virtual reality shows on space travel, the solar system, and the night sky. With volunteer docents ever ready to serve their guest, you can ask any question about items on display. You can also learn more about aviation by signing up for a space lab live astronomy in the dome theater. 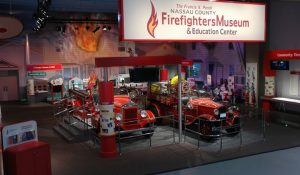 The Cradle of Aviation Museum also hosts the almost 10,000 square foot Nassau County Firefighter’s Museum and Education Center. There, visitors can acquire historical information on fire fighting. On display are antique and contemporary fire apparatus spanning the history of firefighting in Nassau County.
The facility house the JET BLUE DOME theatre that features IMAX 70 millimeter format films. It also hosts a state-of-the-art digital planetarium and The Red Planet Cafe, which is decorated to resemble a space station on Mars.

The Cradle of Aviation Museum opens from Tuesday to Sunday from 9:30 am – 5 pm.

The Reckson Visitor Center Atrium serves as the main entrance to the museum.

Visitors have access to the facility on a guided tour.