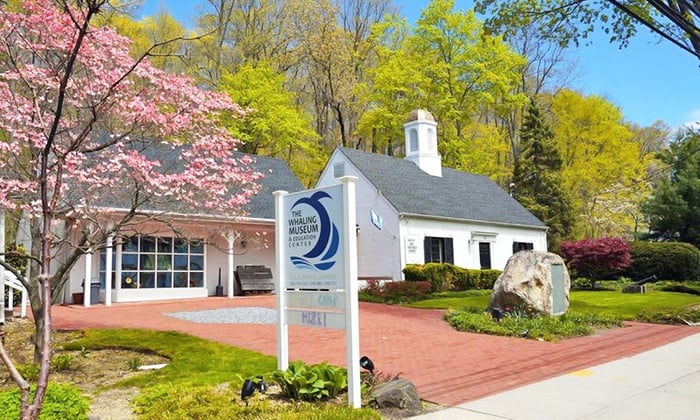 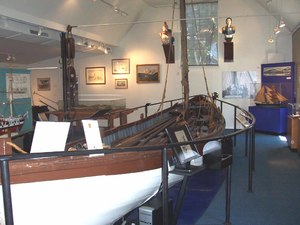 CSH Whaling museThe Whaling Museum & Education Center, formerly known as the The Whaling Museum, is a maritime museum located in Cold Spring Harbor, New York dedicated to exploring the local history and impact of the whaling industry, the maritime heritage of Long Island, and the relationship between people and the ocean. The Whaling Museum has served three generations of Long Islanders, having opened its doors to the public in 1942. The Whaling Museum is the only facility on Long Island and in New York State open year-round which focuses primarily on the whaling history of the region. The mission is to explore the ever-changing relationship between humans and whales through inquiry-based education and interpretation of artifacts that emphasize the cultural, scientific and environmental significance of Long Island and the Sea, and is accredited by the American Alliance of Museums.

The collection was formed by the local community who recognized the need for a repository to preserve the region’s local maritime history and Cold Spring Harbor’s whaling past. The museum holds about 6,000 documents and artifacts from Cold Spring Harbor and other Long Island whaling towns.

The museum hosts educational events and exhibitions year-round, including films, lectures, performances, and special events, many of which creatively connect the subject of whaling to other subjects in art, science, and culture. The museum’s education department runs an extensive “Museum to You” program, as well as camp weeks during school breaks.

The Museum’s collection attests to Long Island’s maritime heritage based in the whaling industry. The majority of the Museum’s collections were donated over time, starting as a community repository from the Museum’s founding in 1936. Totaling 6,000 pieces, most pieces speak to the 19th century whaling industry, specifically Long Island whaling, as well as the local history of Cold Spring Harbor and its growth as a maritime port. These artifacts show the complexity of whaling and its regional importance – and more importantly, its timely lessons for today: these artifacts offer important messages learned from environmental and economic choices of the past.

The collection includes:
• Scrimshaw: 500 scrimshaw items crafted by whalers at sea, one of the true American folk arts, including decorative pieces on teeth and tusks. The collection excels in its variety of hundreds of utilitarian pieces such as sewing boxes, swifts, busks, fids, and jagging wheels – a collection considered one of the finest in the northeast.
• Whalecraft, Ship Gear, and Navigational Aids: 275 Tools, including a 19th-century whaleboat from the Long Island whaleship the Daisy (and the only fully equipped whaleboat with its original gear on display in New York State), with a collection of tools, trypot, figureheads, and navigational tools.
• Richmond Collection: The Museum acquired a major addition in 2012 of documents, letters, receipts, shipping lists, and manuscripts preserved from the Cold Spring Harbor ship the Richmond, wrecked on the Bering Straits in 1849. The archive reveals the Richmond’s significant history as the focus of a legal judgment in maritime salvage law that holds effect to this day.
• Models: 12 detailed models of whaling ships, including one by the master ship model maker Henry Culver; a large diorama of Cold Spring Harbor in 1850 (48 inches × 72 inches), painstakingly completed in 1970.
• Marine Art: 150 paintings, lithographs, and daguerreotypes depicting whaling scenes; works by Currier & Ives, S.A. Mount, C. Ashley, W. Brandford, and watercolors of local ships by E.F. Tufnell.
• Daily Life: 6 costumes, 50 whale oil lamps and candleholders, accessories, and objects of daily living in the 1850s donated by local whaling families; ship in a bottle, early 19th century glass flasks, kitchen tools, and prescription bottles.
• Natural History: 25 skeletal whale bones; 2 narwhal tusks; sperm whale jaw; orca skull; ear bones; blubber sample; other biological specimens from ocean life, including coral.
• Hewlett Collection: Acquired in 1989 from the state of John D. Hewlett including over 200 photographs, 300 pieces of correspondence pertaining to the growth of Cold Spring Harbor as a maritime community, Edward Lange landscapes, portraits by S. A. Mount of local citizens, ledgers from local industries including grist mills, saw mills, and shipyards, providing a wealth of research.
• Hoie Collection: 24 whaling-themed watercolor paintings by the locally celebrated Long Island watercolorist Claus Hoie (1911-2007), gifted in 2012 to the Museum through the Hoie Foundation.

The Whaling Museum’s gallery is located at 301 Main Street in Cold Spring Harbor, NY 11724. Phone: 631-367-3418. The Museum is on Route 25A on the North Shore of Long Island, in Suffolk County’s Cold Spring Harbor, which was a whaling port in the 19th Century.

For more information go to the following website: http://www.cshwhalingmuseum.org/exhibits.html